This page is hosted for free by zzz.com.ua, if you are owner of this page, you can remove this message and gain access to many additional features by upgrading your hosting to PRO or VIP for just 32.50 UAH.
Do you want to support owner of this site? Click here and donate to his account some amount, he will be able to use it to pay for any of our services, including removing this ad.

This year’s European Championships are now well under way in France, and there’s already been some great football on show. It might surprise you to learn that some chemistry has also been taking centre-stage! The Euro 2016 ball is a triumph of materials science, and in this post we take a look at some of the chemicals that make it up. 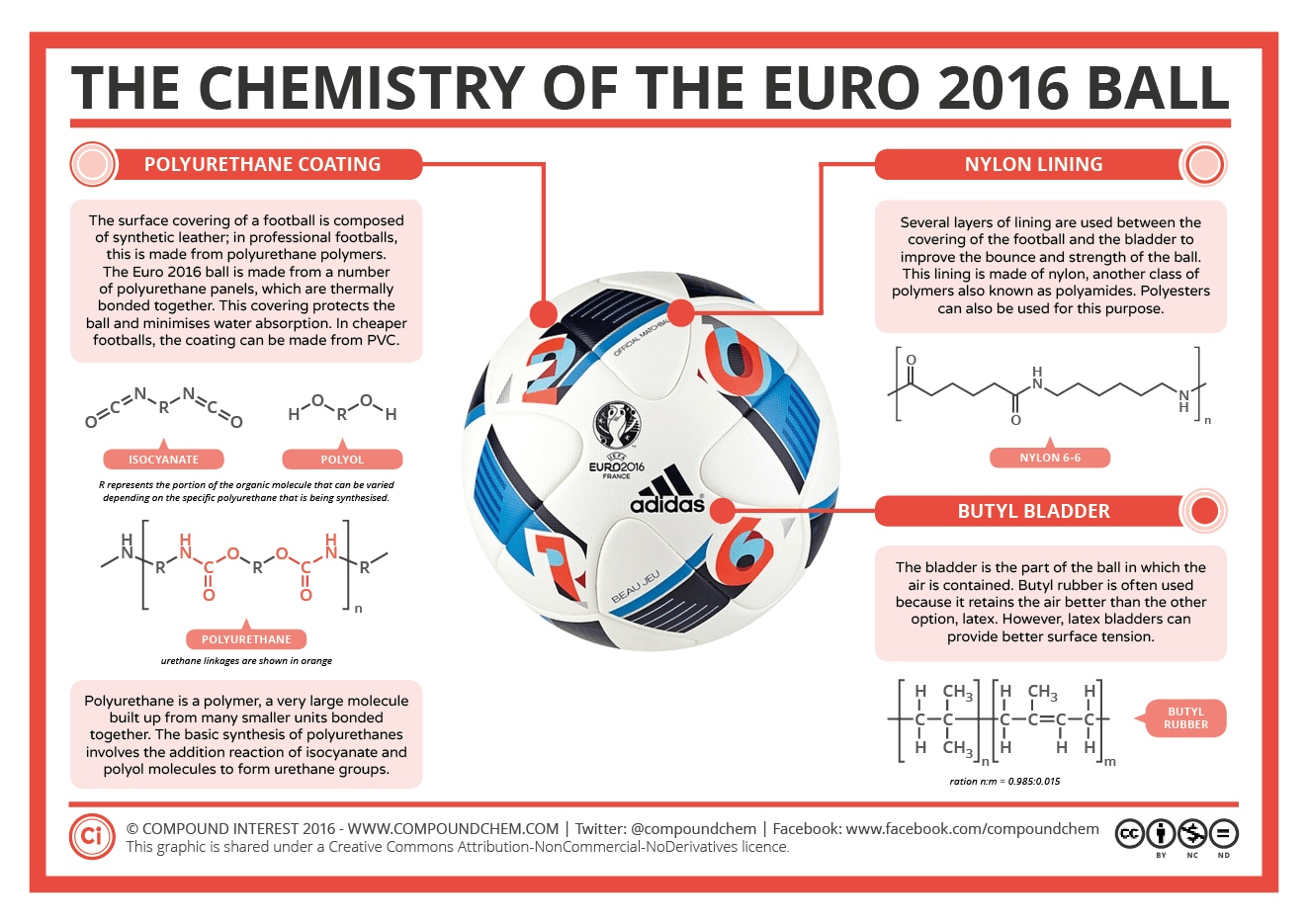 A number of chemical materials are used in the manufacture of the Euro 2016 football. The majority of these materials are polymers; these are very long molecules built up from many smaller component molecules. A simple, everyday example is polyethene, used to make some plastic bags. Different classes of polymers are used to achieve particular properties for the ball.

Footballs consist of three main component parts: the covering (the outermost layer), the lining, and the bladder. Of course, these will be designed in a manner that provides the most favourable aerodynamic properties for the ball – however, that’s veering dangerously into physics territory. None of these properties would be achievable without chemistry providing the materials required, so here’s a breakdown of the different types of polymers used in each component part of the ball.

The covering of the ball is made of six polyurethane panels, which are thermally bonded together. This covering is important to protect the ball, and to prevent it from absorbing too much water – the water absorption of the ball has been improved from the World Cup ball of two years ago, which had a water absorption of just 0.2%. This makes the ball much lighter than the leather-coated balls used in the past. Some balls may also have a polyurethane foam layer underneath the covering.

Polyurethanes are built up from compounds called isocyantes and polyols. The middle parts of these molecules can be varied to give different polyurethanes with differing properties. Polyurethanes have a wide range of applications, including foam in seating, adhesives, synthetic fibres and even skateboard wheels.

Cheaper footballs may use PVC (polyvinyl chloride) instead of polyurethane for the coating. They may also be stitched together, rather than thermally bonded. This stitching will be made from another class of polymers called polyesters; on higher end balls this stitching may be reinforced with Kevlar.

Underneath the covering layer, the ball will have several layers of lining. These are present to improve the bounce and strength of the ball. In the Euro 2016 ball, these are made from another class of polymers, polyamides, more commonly referred to as nylon. Polyesters can also be utilised for this purpose.

Nylon and polyesters are also commonly used components in the manufacture of football shirts, as well as other clothing. Nylon is additionally used in parachutes, ropes and fishing nets, whilst polyesters can be found in bed sheets, carpets and plastic bottles.

The bladder is the part of the football that holds the air. In the Euro 2016 ball, this is made from butyl rubber, but it can also be made from latex. Both have their benefits: butyl rubber retains the air for a longer period of time, whilst latex provides better surface tension. Butyl rubber can also be found in the valve through which air can be pumped into the ball, where it aids air retention. Silicone valves can also be used.

Most modern chewing gum also uses food grade butyl rubber to give the gum its elasticity. Unfortunately, it also contributes the unwanted stickiness of gum. It can also be found in the inner tubing of tyres.

This is just a peek into the world of polymers – any plastics you use on a day-to-day basis are composed from polymers, as well as your clothing, and many other everyday items. Without synthetic polymers, Euro 2016 would be kicking off today with a much more rudimentary ball!